From the Desk of Jim R, Take 2, Column 245, A Book Review: "True Believer" by Nicholas Sparks 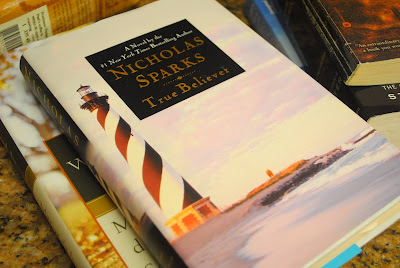 The works of author Nicholas Sparks - like the writer himself - have attained a popularity, status, appreciation, and fondness from readers all across the world.

As a novelist, Sparks writes from the heart. An exceptional storyteller, his books are rife with imagination, nuance, allure, resonating triumphs and tragedies, vivid characterizations, impassioned, truthful dialogue and creative mindfulness. He knows how to tell a good story that is both memorable and enjoyable. He writes passionate stories that people want to read, chock full of human emotion, drama, surprise and insight. He knows how words must look on a page, how sentences should sound and what particular voice should be used as his stories unfold.

To date, over 120 million copies of his novels have been sold. All of his books have become national/international best sellers and have been translated into more than 50 languages. Twenty of them have placed on both the New York Times and London Sunday Times Book Review List in the #1 spot. And eleven of his novels have been adapted into major Hollywood films including "The Notebook," "Message in a Bottle," "The Longest Ride," "Nights in Rodanthe," "The Last Song" and "The Best of Me." 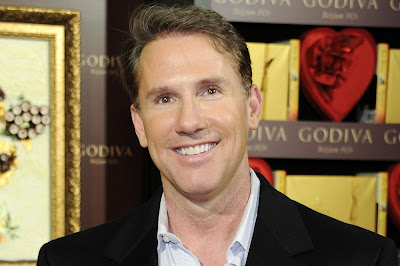 With "True Believer," Sparks crafts a novel that is a fast, run read - impossible to put down - once you get caught up in the solid, insightful story at hand.  The writing is smooth, welcoming and cleverly construed. The plot twists - there are many - are clever, invigorating and well positioned. Sparks also creates a heady, vivid atmosphere where time and space are well grounded and ripe for page-turning excitement and enjoyment.

The story, in a nutshell, is one that thrusts the reader immediately into the action at hand almost immediately

Jeremy Marsh, a sexy, handsome New Yorker who earns a living as an ace journalist for "Scientific American" and has made his first appearance on national television, is asked to come to Boone Creek, North Carolina (via an important letter from restaurant owner Doris McClellan) to investigate and write about the town's ghostly lights which appear in a legend-shrouded old cemetery that townspeople believe is haunted by supernatural beings and other assorted paranormal activities.

Is there truth to these stories?
Are there really ghosts that prowl the cemetery at night?
Are the diaries documenting these strange nightly occurrences real and truthful?
Are the lights in the cemetery creepy and scary or are they related to some recurring nightly phenomena in Boone Creek?
Or is the legend itself a fabrication designed to bring tourists and thrill-seekers into the town to boost the economy? 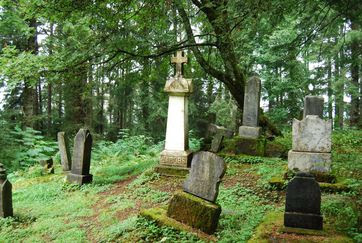 You have to read the book to uncover the mystery, but Sparks, creative writer that he is, doesn't disappoint. The ghost story theme is well documented and well played throughout "True Believer" and the author never fails to deliver. He keeps you guessing from chapter to chapter until all is finally revealed.

The flip side of  "True Believer" explores Jeremy Marsh's attraction and infatuation with Lexie Darnell, an attractive woman in her 30's who runs the town library. Hurt and disillusioned by past affairs and relationships, Lexie hesitates to trust this handsome outsider who has come into the library to do extensive research on the ghost stories of Boone Creek. But as the story progresses, she not only cares for Jeremy Marsh much more than she's willing to admit, but eventually falls in love with him despite impossible consequences.

In penning the Marsh/Darnell relationship, Sparks' exploration of this troubled romance (lots of conflicts, break ups, arguments and steamy sexual desires are portrayed) is distinctive, ambitious, poignant and purest. Better yet, it is never gooey, cliched or preachy. Instead, it is nurtured with the kind of flavorful passion and romantic commitment Sparks is famous for. And the ending - the very last page - is a big surprise in itself. You'll love the final line of the book.

In conclusion, "True Believer" is a confident, self-assured page-turner. It slides from chapter-to-chapter with honesty and perseverance. It is rigorous, quirky, complex and brimming with edgy supernatural freneticism. Attention to detail, plot advancement and characterization is thoroughly fleshed out by Sparks who has plenty of surprises up his sleeve.

Equally clever, is the ghostly fodder that allows Marsh to pan out and discover a wide set of truths, gloom, history, lies, deceit and facts. It's all envisioned marvelously by Sparks who has created a succinct, thought-provoking work that is full of heart, pulse and genuine emotion. His solid grasp on form and structure is unbeatable. And that's exactly what makes him one of the most-read, popular  author's of his generation. 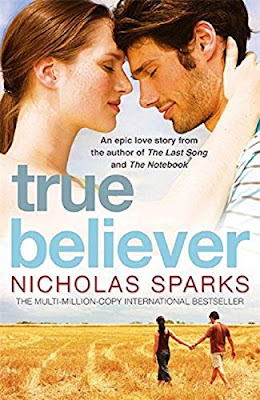 Posted by JimRuocco at 6:02 PM