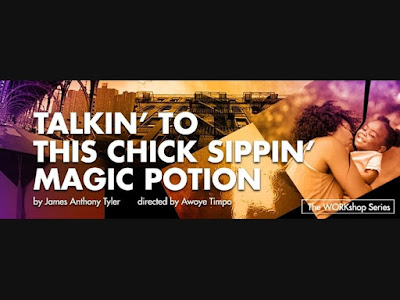 These are the five main characters in James Anthony Tyler's "Talkin' To This Chick Sippin' Magic Potion," a candid, hypnotic and in-your-face work in progress, that has wisely captured the attention of TheaterWorks/Hartford, the perfect venue to showcase the playwright's new work, which, one day will near completion, and hopefully end up being added to the theater's mainstage season line-up once the COVID-19 pandemic finally runs its course and theatrical venues could reopen again.

The production, which is being streamed online in its entirely, runs 95 minutes. As penned by Tyler, the play respects, taunts and challenges its characters without making them stereotypes. They clash and comfort each other with a motivated familiarity that immediately draws you in and keeps you glued to your computer screen (HP, Apple, Dell) or TV (Xfinity rules), anxiously awaiting the next plot move, scene change, character quirk, flip or revelation without looking back.

"What you are about to see is a capture of a moment in time of a play," explains playwright James Anthony Tyler, the recipient of the 3rd annual Horton Foote Playwriting Award and graduate of the Juilliard School's Lila Acheson Wallace American Playwrights Program. "I first started working on it back in 2016. And this is a work that's still very much in progress." 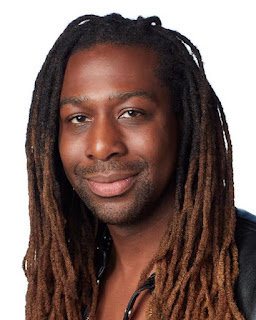 "Talkin' To This Chick Sippin' Magic Potion" openly discusses sex, virginity, gender, marriage, break ups, lesbianism, parental conflicts with children, big city life, monetary budgeting, job security, truth, lies, resentment and deception. Tyler's play also addresses workplace angst and sexual harassment, the do's and don'ts of serving or not serving watermelon in a salad with feta cheese, a daughter's graduation day, job advancement by a move to New Haven, a speeding car operated by a white man with a dick that nearly runs over two of the play's main characters and how and when sexual attraction for the same sex broke up a once happy marriage.

Per TheaterWorks/Hartford, here is a breakdown of the scripted production with additional commentary "par moi."

Jornay is a professional cuddler ($100 a session) who discovers that her newest client Ruben needs more than her touch (now that his father has died, he's torn apart and wants to move back to Puerto Rico), a situation that often angers her lesbian girlfriend (a control freak at the very least) as does Jornay's obsession with Tiffany, her 17-year-old daughter who's about to graduate from high school with her father Steve (he is hearing impaired) in attendance but not Jornay.

Sheria Irving as Jornay
Miriam A. Hyman as Sheba
Mateo Ferro as Ruben
Darius McCall as Steve
Jules Latimer as Tiffany
All five actors are making their TheaterWorks/Hartford debut.

On Broadway, Sheria Irving has appeared in "Romeo and Juliet." Her other credits include "White Noise" at the Public Theater, "While I Yet Live" for Primary Stages, "The Model American" at Williamstown Theatre Festival and "The Winter's Tale" and "Cymbeline" at Yale Rep. The actress also holds an MFA from the Yale School of Drama. 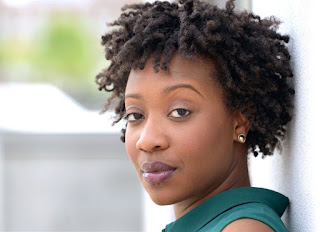 Miriam A. Hyman is both a classically trained actress and Hip Hop recording artist. Her credits include "Socrates" and "Richard III" for the Public Theater, "Cymbeline" at Yale Rep, "The Tempest" at La MaMa, "Piano Lesson" at the McCarter Theater and "Richard II" for Shakespeare in the Park Radio.

Mateo Ferro is excited that "Talkin' to This Chick Sippin' Magic Potion" is being streamed online. He is perhaps best known for his starring roles as Sonny in the 2018 Broadway Center Stage production of "In the Heights" at the Kennedy Center in Washington, D.C. He also played the part of Carlos on NBC's "Manifest" the same year.

Jules Latimer has appeared in "Angela's Mixtape" at Martha's Vineyard Playhouse, "Paris" at the Atlantic Theatre and "Romeo and Juliet" for the Chautauqua Theatre Company. A recent graduate from New York's prestigious Juilliard School, Latimer's credits include "The Tempest," "The Owl Answers" and "Paradise Blue."

Darius McCall has appeared in "Superior Donuts," "Flyin' West," "The Bloody Banquet" and "The Shipment." He has also been classically trained as an actor at the Studio Conservatory in Washington, D.C.

"Talkin' To This Chick Sippin' Magic Potion" is staged using a Zoom streaming process that connects the character's in two or three split screen shots or by themselves when dictated by the machinations of Tyler's playwright. Overseeing the action is Awoye Timpo, a Brooklyn-based director and producer whose credits include "The Loophole" at the Public Theater, "In Old Age" for the New York Theatre Workshop, "Paradise Blue" at Long Wharf and "The Homecoming Queen" for the Atlantic Theater Company. 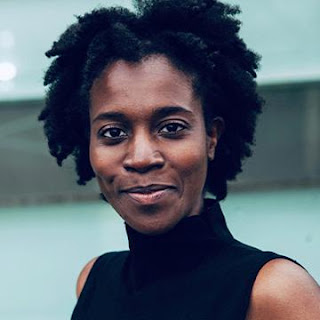 "We were lucky in December to gather a group of actors and collaborators to work through this play," she recalls. "We were able to read the play, do a lot of scene work and have a lot of really wonderful, amazing conversations. So we're so very excited to invite you into the process."

Staging the play via Zoom, Timpo never lets the process upstage the actors or overwhelm the at-home audience, many of whom are not that familiar with viewing productions online or Zoom. Here, the director relies on her cast to move the action forward, completely absorbed in Tyler's tantalizing material, which never falters for a moment. Ten minutes in, you completely forget about Zoom and let the words of playwright work their magic. PS: No potion needed.

"Talkin' To This Chick Sippin' Magic Potion" is being streamed online, now through February 26.
Individual tickets are $25. All tickets have a $3 service fee that is added to the order.
All 24 hour access streams are available to view for one day. Once you accept the streaming terms, you need to complete your viewing during that particular 24 hour time frame. All sales are final with no refunds.

This play is part of the WORKshop series, produced in partnership with Bank of America.