From the Desk of Jim R, Take 2, Column 248, A Review: "Talk to Me Like the Rain and Let Me Listen..." (Connecticut Repertory Theatre) 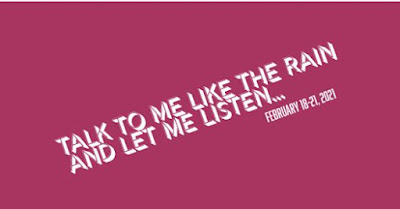 Man: "When I woke up, I was in a bathtub full of melting ice cubes and Miller's High Life beer. My skin was blue. I was gasping for breath in a bathtub full of ice cubes. It was near a river but I don't know if it was the East or the Hudson. People do terrible things to a person when he's unconscious in this city. I'm sore all over like I'd been kicked downstairs, not like I fell but was kicked. One time I remember all my hair was shaved off. Another time they stuffed me into a trash-can in the alley and I've come to with cuts and burns on my body. Vicious people abuse you when you're unconscious. When I woke up I was naked in a bathtub of melting ice cubes. I crawled out and went into the parlor and someone was going out of the other door as I came in and I opened the door and heard the door of an elevator shut and saw the doors of a corridor in a hotel. The TV was on and there was a record playing at the same time; the parlor was full of rolling tables loaded with stuff from Room Service, and whole hams, whole turkeys, three-decker sandwiches cold and turning stuff, and bottles and bottles of all kinds of liquor that hadn't even been opened and buckets of ice cubes melting. "

Woman: "I will read long books and the journals of dead writers. I will feel closer to them than I ever felt to people I used to know before I withdrew from the world. It will be sweet and cool this friendship of mine with dead poets, for I won't have to touch them or answer their questions. They will talk to me and not expect me to answer. And I'll get sleepy listening to their voices explaining the mysteries to me. I'll fall asleep with the book still in my fingers, and it will rain and I'll go back to sleep. A season of rain, rain, rain. Then, one day, when I have closed the book or come home alone from the movies at eleven o'clock at night, I will look in the mirror and see that my hair has turned white. White, as white as the foam on the waves."

(Tennessee Williams, "Talk to Me Like the Rain and Let Me Listen...")

In "Talk to Me Like the Rain and Let Me Listen," a one-act play written by Tennessee Williams in 1953, two people - an unnamed man; an unnamed women - openly bare their souls while clinging to life and sadly wasting away in a cold-water flat on the Lower East Side. He is a drunk who wakes up in his underwear in some random hotel with no idea of how he got there, who brought him there and why is was attacked by some randoms.

"People do terrible things to a person when he's unconscious in this city," he tells us. "I've been passed around like a dirty postcard."

She, in turn, has spent the last three days staring out the window, drinking nothing but water, talking endlessly about the rain, life's many disappointments and growing old while choosing to ignore life and  mankind in the outside world. "I will read long books and the journals of dead writers," she explains. "I feel closer to them than I ever felt to people I used to know before I withdrew from the world."

The play itself, clocking in at a mere 20 minutes, immediately grabs you by the throat and messes with your senses, the minute each of the characters begins to speak. Tennessee Williams wouldn't have it any other way and therein, lies the fascination with this intimate, well-written two character play. Like so many of the playwright's other works, it digs deep inside the human psyche heightened by honest, in-the-moment dialogue about poverty, desperation, uncomfortable truths, fantasies, escape and misery. 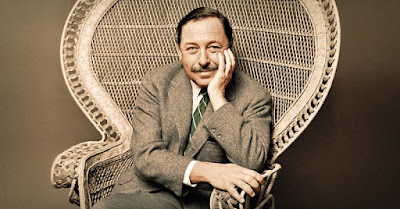 As produced by Connecticut Repertory Theatre, "Talk to Me Like the Rain and Let Me Listen" is being streamed online using Zoom, an audio/video conferencing platform with high quality capabilities that lend themselves nicely to this effective, watch-from-home production event.

Overseeing the action is director Dexter Singleton whose credits include "The Royale," "Black Book," "The Mountaintop" and "Jesus Hopped the A Train." Later this season, he will stage "And Tell Sad Stories of the Death of Queens" and "This Property Is Condemned," two additional one-acts by Williams.

Using black-and-white filters to project the play's 1950's period aura, Singleton brings pain, passion, mystery and excitement to the piece, thrusting you head first into the core dynamic of the play, its rumpled imagery and its obvious separateness. As the story evolves, he also effectively uses the Zoom process, alternating between full screen and split screen depending on the action at hand. It's a balancing act he augments with precision, skill and eavesdropping intensity. 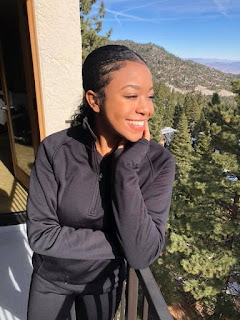 The casting is unique.

Both Colin Kinnick (Man) and Casey Wortham (Woman) are rightfully attuned to Williams' heightened, often poetic dialogue, its pulsating rhythms and juicy conversations. Playing characters on their last legs, so to speak, they each get inside the heads of their characters, which here, is handled brilliantly by the attractive, passionate, challenged twosome. They also deliver full-throttle monologues that are solid, riveting and well understood within the contest of the play. The precision, pacing and naturalness they exude transforms "Talk to Me Like the Rain and Let Me Listen" into the must-see theatrical event of the winter season.

A perceptive, knotty and vital work with smart direction and two rapid-fire performances, this one act play by Tennessee Williams sets its sights high and delivers an electrifying buzz that is truly unforgettable.

"Talk to Me Like the Rain and Let Me Listen" is being streamed online, now through February 21, 2021. An event link will be emailed to you 24 hours before the virtual performance. Tickets are $5. Performances are 2 and 8 p.m. February 20 and 2 p.m. February 21. If you have any questions, email crtboxoffice@uconn.edu. 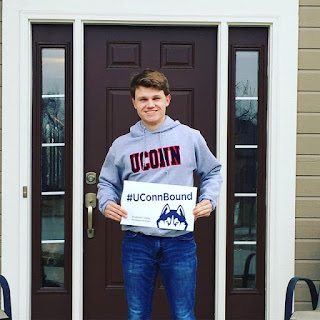