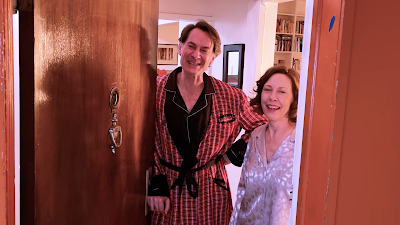 "Death is very laughable. It's such a cunning little mystery. It's all done with mirrors."

"It doesn't suit women to be promiscuous."

"Darling, you look awfully sweet in your little dressing gown."

"You mustn't be serious my dear one. That's just what they want."

It's a pity you didn't have more brandy. It might have made you a little less disagreeable."

Written and first performed in London, 1930, "Private Lives" is an acerbic, detailed commentary of love, marriage, commitment, physical attraction, divorce, second chances and over-the-top marital conflicts. It is characterized by the playwright's cheeky trademark dialogue, his wit, his flamboyance, his poise, his articulate polish, his unapologetic snap, his nervy restlessness and his deliciously wicked sophistication.

"Elyot & Amanda: All Alone," a 38-minute online stream, produced by the Hartford-based Playhouse on Park, takes its cue from the second act of "Private Lives" and offers at home viewers an upclose look at the two argumentative honeymooners whose spouses Sibil and Victor have been deleted from the script along with any references made by Coward. The new script, written by Ezra Barnes and Veanne Cox, the two actors who play Elyot and Amanda, has been updated to the present (i.e, the pandemic) complete with sanitizer, weed and face masks. The set, a real-life apartment, where the production was filmed in the actors' place of quarantine (based on rules set forth by Actor's Equity, no one was present during the filming, which was done remotely by Hartley Abdekalimi, Alex Zelinski and Johann Fitzpatrick), is a mixture of both past and present, and much to the delight of everyone involved, a sort of third character in the piece. It is handsome and stylish, reflecting a design that complements the production and its Noel Coward ambiance. 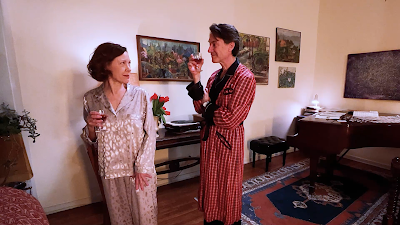 However, unlike "Private Lives," "Elyot & Amanda: All Alone" is neither turbocharged, flip or recklessly kinetic. It also lacks the bounce and ping (more on that, later) of Coward's playtext, its grounding merriment, its biting sting, its cloying contrails and its impassioned dynamics.

The big question: Is "Elyot and Amanda: All Alone," a complete failure?
Hell, no!

It is fun. It is entertaining. It is lightweight. It is sweet and poignant. It is candy-coated and gleeful. It is daft and romantic. It is refreshingly down to earth. It is comedic and progressive.

Since this production is not done for the stage,  it adapts an entirely different pulse and pacing that separates it completely from "Private Lives." The playing area also dictates a certain aura and heartbeat that takes it completely out of the Coward arena, most noticeably the ping pong match frenzy of the dialogue, which is delivered in rapid succession by the characters with a pause and breath tossed in unobtrusively when called for.

Staging the Playhouse on Park production, director Sean Harris retains the bliss, conflict and romanticism set forth by the Barnes and Cox adaptation, but opts for a much slower pacing, which is very un-Coward, but nonetheless, keeps "Elyot and Amanda: All Alone" afloat. He takes full advantage of the real-life apartment setting and guides his two character cast through the proceedings matter-of-factly, making sure they are in sync with the telling of their story, its conflicts, its remembrances, its broad, physical strokes and its comic zingers. It's a valiant effort but Harris knows exactly what he wants and he runs with it.

The casting of Ezra Barnes and Veanne Cox as Elyot and Amanda is spot on, jammed packed with combustible energy, passion, personality and sparring wickedness. Barnes is charming, mischievous, wistful and suave, which is exactly right for the character of Elyot. He tosses off some rather clever dialogue with energy and brio and makes Elyot and Amanda's relationship real, focused and heartfelt. Cox is wonderfully passionate, sensual and playful as Amanda. She has remarkable appeal and is completely at ease with the sharp-witted dialogue of the piece, its purpose and importance to the story and its priceless absurdity. She is also spirited, lighthearted, direct and mysterious and displays an exhilarating charm, chemistry and partnership with her equally talented co-star.

"Elyot and Amanda: All Alone"  is available to stream online through March 7,  2021. Individual tickets are $20 each and can be purchased through Showtix4u.com. Upon purchasing a ticket, you will receive a code to access the stream.
For more information, call (860) 523-5900. 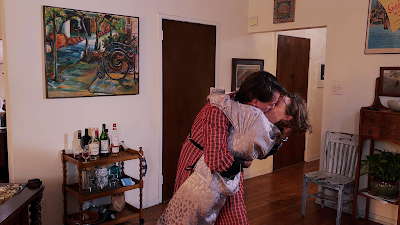