From the Desk of Jim R, Take 2, Column 195, A Review: "God of Carnage" (Greenwich Theatre Company) 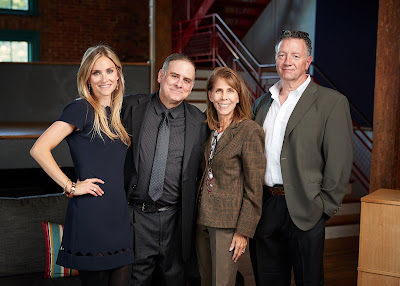 "Theatre is a mirror, a sharp reflection of society."
(Yasmina Reza, Playwright)

In Yasmina Reza's  thrilling, high-powered dark comedy "God of Carnage," everything hinges on the casting, the direction and the shrewdness of how it all comes together in an 85-minute time span without an intermission.

On Broadway, the exhilarating frisson of James Gandolfini, Marcia Gay Harden, Jeff Daniels and Hope Davis as two middle-class couples who meet one night to discuss and resolve a heated schoolyard fight between their two 11-year-old sons (one boy strikes the other with a stick that knocks out his two front teeth), prompted a verbal tango of unforgettable madness and razor-sharp imagination that was not easily forgotten.

At Greenwich Theatre Company where "God of Carnage" has been justifiably and superbly revived, the effect is very much the same with Mike Boland, Stephanie Hazard, Jason Peck and Wynter Kullman assuming the roles once played by that luminous Broadway foursome. Every joke, every insult, every quirk and every rant is played full-throttle by this tremendously talented quartet with the acidity and rippling irony it demands, thus, making this 2019 incarnation bristle with a life force and primitive aggression all its own.

This production not only has a wonderful sense of intuition about it, but it is potent with very savage,  edges. It flows passionately and impressively freely. It is liberal and angry. It is compassionate and nuanced. It is mouthy and perverse. It pulls no punches. It dissects society with stinging impact. It also retains the crackling precision, the fiery cynicism and the symbolic abundance commandeered by its creator. Elsewhere, a running gag of incessant cell phone interruptions mixed with characters continually switching sides, having anxiety attacks, spouting four-letter words, getting completely bladdered by booze or accidentally revealing their true colors in rapid fire succession, heightens the play's vitriolic energy. 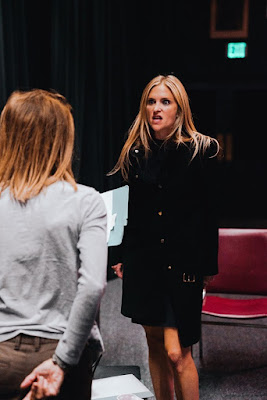 "God of Carnage" is being staged by Rob Kennedy whose directorial credits include "The Curious Incident of the Dog in the Night-Time," "Catch Me If You Can" and "The Addams Family." A smart and savvy showman with an attentive appetite for Reza's talky, driven character drama, Kennedy accepts the playwright's rules of the game, her pragmatic undercurrents, her skillful hypocrisies and her blatant truisms and delivers a meaty mind game of sorts that taunts and teases, spits and brays, fucks you over, toys with your senses and yanks you head first into the play's well-timed jokes, arguments, ideas, confessions, outbursts and breaking points.

Like Reza's other works - "Art," "The Unexpected Man," "A Spanish Play"- "God of Carnage" unfolds with dialogue and conversations that demand the right pacing, the right rhythms, the right mindset, the right motivation and the right stimulation. One wrong move, one missed cue or one abrupt halt in the action and it's over. Just like that. With Kennedy pulling the strings, that never happens here. He not only knows the play inside out, backwards and forwards and front and center, but creates a three-ring circus of sorts (shades of Edward Albee's "Who's Afraid of Virginia Woolf ?") that keeps coming at you from all directions with an emotive thrust and scrutinization that keeps to Reza's triggered conceit, its distinct criterion and its locked horns ante.


"I am not a member of polite society. What I am and always have been is a fucking Neanderthal."
(Michael, "God of Carnage")

As penned by Reza, the dialogue is very rhythmic. It's all beats and measures. It's timed and played to the second. It's all very exact and specific. Even the overlapping voices of two or more characters talking at the same time requires the same split-second acumen. Here, as in the Broadway production, the real pleasure of  "God of Carnage" comes from the fiendishly clever manipulation of the four central characters in real time which Kennedy masters with naughty, playful and stylish outrageousness. The fact that you never quite know what's around the corner or how things will actually play out heightens the play's appeal, its story arc evolution and its numbing conclusion. 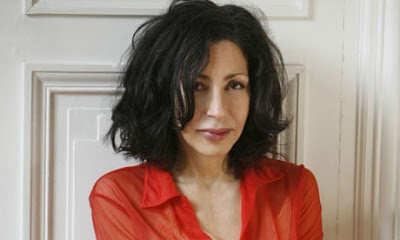 More importantly, there's always a big reveal or a big surprise at the heart of a Reza play which shocks, titillates and makes for exceptional theatre. In this go round, that trademark gasp of excitement occurs about halfway through the production. It is a bold, brilliantly orchestrated move for one of the play's four character's that Kennedy builds and shapes with such wicked glee, a jaw dropping release of  shock and disbelief from every member of the audience is practically guaranteed when the big moment comes.
The staging for this particular sequence, in part, is similar to that of the Broadway production. But the advantage here is the voyeuristic closeness between actor and audience that changes things considerably and prompts an in-your-face "Oh, my God, did you see what just happened?" effect that you didn't quite get in the original New York production. It will blow your mind as will the aftermath of it all, which is imaginatively staged in extreme close up by Kennedy who reveals a maddening cleverness that Reza, if she were present, would stand up and cheer. 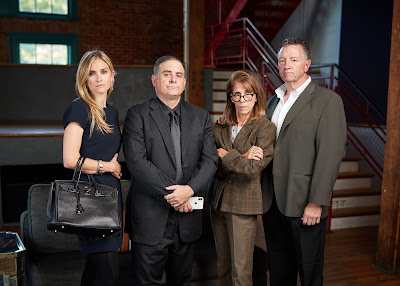 It's a well-known fact that Reza writes plays for actors - an ensemble of equals, that is - who revel in the wicked dynamics of her page-by-page conversations and quirky diatribes using an edgy, savvy, satiric mindset that brings just the right amount of dramatic resonance to the material and its razor-sharp chasms, jousts, name-calling and dicey hauteur. With the brush strokes in place for this originally shrewd, cultivated satire, there's something revelatory in every performance here.

In the role of Michael, a man very eager to create peace between the two conflicted school boys, Mike Boland delivers a raw and powerful character portrait of a typically uncouth individual who tries too hard, makes racial slurs and denounces child-rearing as something completely wasteful. His timing is impeccable. His line delivery is flawless. He nails the emotional heart and soul of his character's persona perfectly. He takes chances and runs with them.  He can be truth or dare at once. And often, when just standing there listening and observing, we know exactly what he is thinking.

As Michael's judgmental wife Veronica, a woman who is writing a book about the Darfur atrocities and hopes to maintain a peaceful resolve for her son's injury, Stephanie Hazard is a whirlwind of rational deliberation, personal bias, emotional pain and thin-lipped liberalism. It's a part she owns and plays with complete honesty, drive, passion and amazing serio-comic flourish. Smartly attuned to Reza's linguistic oeuvre, she displays the right rhythms, tics and beats in an open arena where dangerous mind games and limited visions collide within the marvelously sketched limits of the playwright's controlled, wickedly funny blueprint.

Jason Peck, cellphone in hand for the part of Alan, an obnoxious, self-centered lawyer representing a pharmaceutical company about to be sued over one of its new products that has harmful side effects, delivers an emotionally wild, roller-coaster-ride of a performance that gets under your skin, slaps you in the face, pisses you off and makes you want to get up from your seat and punch him very hard in the stomach for being such a first-class prick. Then again, that's the point, isn't it?
His face - conveying a mess of smarmy, desperate and fearful emotions - pulls you right into Alan's convoluted story, his shaky marriage, his slimy business tactics and his pacy anxiety. Elsewhere, his remarkable ability to shift gears from story to cell phone within a millisecond many, many times over is brilliantly rendered as is his complete breakdown, a wonderfully orchestrated actor's moment that prompts cheers and convulsed laughter in all the right places. 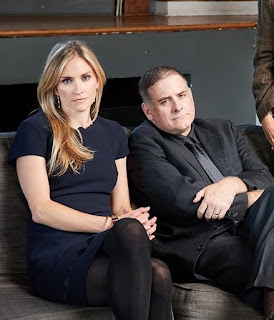 As Alan's wife Annette, a woman on the verge of yet another panic attack who is constantly annoyed by her husband's feckless behavior and total ignorance, Wynter Kullman, last seen in Thrown Stone's "Cry in Out," gives yet another stand out performance in an electrifying role in which she is absolutely amazing. Here, as in "Cry It Out,"  Kullman is very clear about her character, her dialogue, her conversations, her moves, her expressions and her interaction with the other on-stage actors. She plays the part of Annette effortlessly with smartness, purpose, angst and a broodingly intense desperation that is thrilling to watch and discover.
What's exciting about her work at Greenwich Theatre Company is how she goes about it. Yes, "God of Carnage" is rehearsed page by page to fit its allotted running time. Yes, Kullman is blocked to move, speak and participate on cue. Regardless, she is so refreshingly honest and focused, everything she does is real, impassioned and truly inspired without any rehearsed feel whatsoever. If anyone is doing Federico Garcia Lorca's visceral 1934 drama "Yerma" in the near future, Kullman would be perfect for the lead role of Her, a manic, misunderstood, depressed woman whose descent into madness is astounding. It's a part that would show her in an entirely new light and one she could inhabit with unhinged melodrama and therapeutic pathos.

Tense, satirical, edgy and unpredictable, "God of Carnage" is an exhilarating piece of theatre written with great insightfulness and craft by Yasmina Reza. Under Rob Kennedy's smart, unrelenting direction, the cast of four - Boland, Hazard, Peck, Kullman - deliver confident and determined performances that crackle with such excitement, you forget that you are in a theater watching a play.
A bold, disturbing work of tremendous power, "God of Carnage" jump starts Greenwich Theatre Company's premiere season in Fairfield County. It is a thrilling beginning for what promises to be one of the most talked about new Equity theater companies in the state and one that audiences will embrace most engagingly. 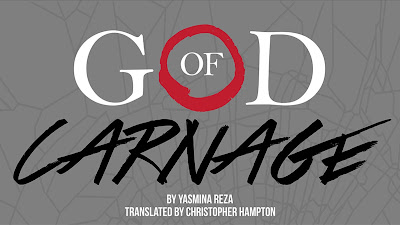 Posted by JimRuocco at 5:13 PM