From the Desk of Jim R, Take 2, Column 199, A Review: "Witness For the Prosecution" (TheatreWorks/New Milford) 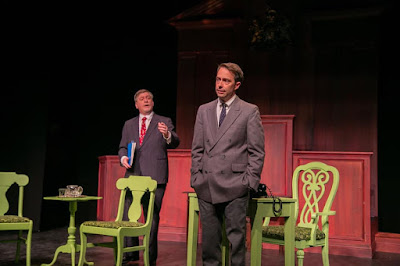 The clues and plot secrets in any Agatha Christie murder mystery are hidden in plain sight.

The time of the murder is central to the whodunit.

The character and motives of the culprit are vital to the telling of the story as are the trick endings no one saw coming.

The who's who rota, replete with thrilling back stories, is a guessing game designed to prompt initial excitement.

The crime solver of the piece must be highly intelligent with plenty of theories and deductions that are easy to follow.

The power to surprise and amaze is evident and prompts mainstream appeal.

And finally, the ultimate solution reveals a wit, clarity and narrative finesse that completely satisfies. 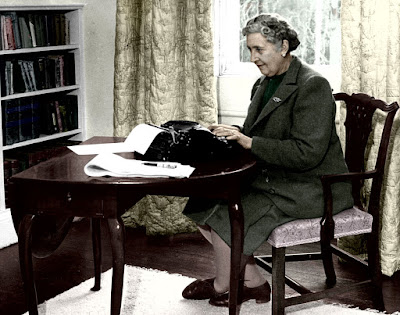 With "Witness For the Prosecution," a twisty, deliciously involving courtroom drama fueled with the kind of played-up melodrama one expects from the self-proclaimed  "Queen of  Crime," an innocent man (or, so he says) is on trial for the murder of an wealthy elderly woman who has left him everything in his will.

But, did he do it?
Is someone else involved?
Is the testimony of various witnesses in the Old Bailey Courtroom valid, truthful, fabricated or lies, followed by more lies?

This "Witness For the Prosecution" is an atmospheric, emotionally layered whodunit - surprising at every turn - where the impact left is both impressive and invigorating. 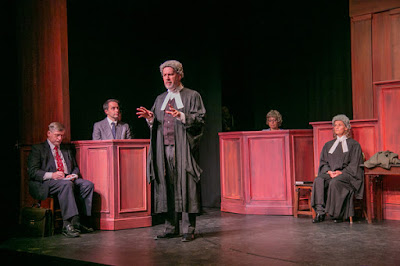 Staging the two-act drama is Frank Arcaro, a director who brought edge and intrigue to David Auburn's "Proof" last season at TheatreWorks. Here, he does a brilliant job of articulating the whodunit conceit, the guilt, attitude, inquisitiveness and responsibility of both story and characters and the roaring conflict set forth by Christie's contextualized mind games. As with "Proof," he knows how to shake things up, knock you off balance, keep you guessing and toy with your senses while waiting for the big reveal.

Working from Christie's innovative blueprint, Arcaro, knowing the twisty escalation that ends the two-act drama, takes his audience on a roller coaster ride of a journey, revealing only signature bits and pieces necessary to propel the story forward. He asks you to sit back and listen. He wants you to put on your thinking caps and play detective. He takes a breath now and then to let the material breathe and resonate. He steers you in the wrong direction, anxious to catch you off guard or succumb to the wrong information. He also asks you to listen attentively to the testimony, the back talk, the interrogations, the truth and the deceit.

From act to act and scene to scene, Arcaro creates a masterclass of thrills and emotions that give "Witness For the Prosecution" its bite, its sting, it tension and its staying power. He doesn't waste a moment. He knows what buttons to push, what to play up and what to play down. In the courtroom and out of the courtroom, he brings the necessary flourish to the play's individual moments. He never rushes things. He has a firm grasp on the murder mystery mechanics, the staging, the blocking, the stops and go's. He also has rehearsed the play well to avoid any form of staginess or artificiality which could dampen or detract from the play's ongoing melodrama. 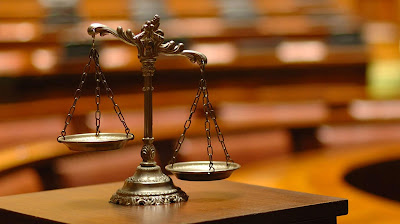 Working with a very large cast of eighteen (all types, all styles, all methods, all acting techniques), he instructs his dramatic ensemble to play by the Christie rule book, adhere to the whodunit concept, play their parts accordingly and interact with one another believably and intuitively. At various points in the trial, he also asks them to mess you about so that you're never quite sure how the actual story will end. Everyone has fun with this concept until the ball drops near the end of Act II. And when it does, it hits you in the face like a hard slap from a scorned lover from which there is no escape. Then again, that's the point, isn't it? 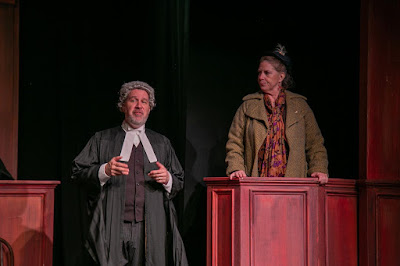 Playing the pivotal role of Janet MacKenzie, the prosecution witness and longtime companion and housekeeper to the late Emily French who names Vole as the murderer, Maureen Sheehan offers the best performance of the night and impresses at every single turn. The characterization itself, reminiscent of some of the key female characters who once populated ITV's "Coronation Street" in the early 1960's, is emotional, revelatory, surprising, centered, observant and very, very real. From the moment she appears on stage, you are hooked, ball, chain, line and sinker. As an actress, her work is so bloody refreshing and honest, one wishes the part was expanded as it was in the edgy 2016 BBC One television adaptation of  "Witness For the Prosecution" that cast Monica Dolan in the same role.

As Leonard Vole, the prisoner in the dock believed to be guilty, Daniel Basiletti is every inch the misunderstood victim. He's tense. He's mad. He's calculating. He's humble. He's bitter. And yes, he plays the part convincingly. But is it all an act before the jury? And is his cry of innocence justified? Or it is part of a theatrical ritual or ruse shrouded in mystery? Timothy Huber, in the role of Crown prosecutor Mr. Meyers, Q.C., crafts a thoroughly believable portrait of a London barrister who exhibits an irascible disdain for his smooth-talking courtroom opponent.

Jonathan Jacobson, cast in the role of defense counsel Sir Wilfred Roberts is slick, articulate and every inch the courtroom intellectual. His look, his mannerisms, his style, his moves and his verbage bespeaks someone who is so well versed in BBC courtroom trials, you never doubt anything he says and does for a minute. The always watchable Jonathan Ross doesn't get much to do as Mr. Justice Wainright, the esteemed Old Baily courtroom judge who observes and comments on the trial at hand. Nonetheless, he's the perfect fit for a part we wears both comfortably, honestly and intuitively.

In the role of Vole's wife Romaine, a calculating, devious woman who testifies against her husband in very heated, well-staged courtroom maneuvers, Thursday Savage plunges head first into her role, perhaps, even finding comfort in a back story culled from the Agatha Christe murder mystery guidebook to add color and nuance to her performance. She works very hard to pull this off, but the fact that she has a tendency to overact causes  her to occasionally stumble, thus, making us always aware that she is an actress playing a part, rather than one who is inhabiting a role well-suited for her talents. A quick rethink of the character and the removal of some over-the-top melodrama would put her back at the top of her game where she belongs.

In a stellar season that has included "Race," "Quartet," "Vanya and Sonia and Masha and Spike," "Witness from the Prosecution" benefits from great direction, excellent use of the theater's intimate playing space, key performances and crafty behind-the-scene's production values. It's theater of the very best kind - and then some.


"Witness For the Prosecution" is being staged at TheatreWorks/New Milford ( 5 Brookside Ave., New Milford, CT), now through October 11.
For tickets or more information, call (860) 350-6863.
website: theatreworks.us

Photos of "Witness for the Prosecution" courtesy of  Ghostlight Photography

Posted by JimRuocco at 9:51 AM