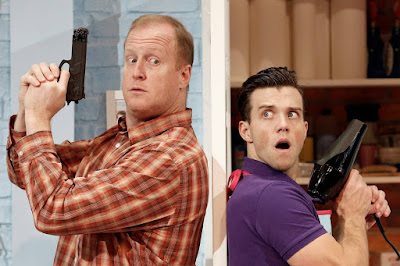 By James V. Ruocco
How funny is "Sheer Madness?"

This is a play that amuses with its crazy human vitality, its pranks and shenanigans, its over-the-top characters and acting, its bungling craziness, its snafus, its double takes, its slamming doors and its  farcical dialgoue. It also comes gift wrapped with trendy 2019 political, geographical, showbiz and newsworthy digs, jibes and insults that are updated and changed periodically depending on the day's events and headlines.

In the middle of it all - a murder - that prompts a whodunit with four primary suspects, all of whom have motive to bump off Isabel Czerny, a reclusive classical piano music star who plays landlady to the unisex hair salon operating directly below her very private, but stylish digs.

Tony Whitcomb: a gay, trendy, gossipy hairdresser who enjoys flirting with the male clientele but is easily distracted by Isabel's loud piano playing which often disrupts his day-to-day hairdressing appointments and causes him to bang loudly on the pipes hoping she gets the message and calls it quits.

Barbara Middleton: a stylish, attractive hairdresser who is newly best friend's with Isabel, loves jumping in and out of bed with handsome men, can't always remember what happened from minute to minute and stands to benefit from the death of you-know-who.

Mrs. Shubert: a classy, wealthy, name-dropping client of the salon with a checkered past, a not-so-happy marriage, a hot guy or two on the side, lots of secrets, lots of motives and a penchant for stealing things from the salon including perfume whenever she gets the urge to play thief or misbehave.

Eddie Lawrence: a shady, well-dressed man and used antiques dealer who knows Isabel, is more than friends with Barbara, sneaks in an out of the salon unobtrusively and has a tendency to put things in his briefcase when no one is looking. He is also very interested in Isabel's piano, among other valuables of hers.


The Problems Solvers:
Nick O'Brien is the cop who shows up to lead the murder investigation and solve the crime with the jerky assistance of Mikey Thomas, his nerdy sidekick. For story purposes, neither one of them is a suspect. No eleventh hour revelation, here.


The Audience:
The audience is also the star.
As dictated by playwright Paul Portner, the ending of the play changes nightly as the audience hears or write down clues, question the actors when the house lights come up and votes on who they think is the culprit. Whoever is chosen as the murderer must jump back into the story, improvise the dialogue with everyone else (some of the key story points are scripted) and bring "Sheer Madness" to its hilarious conclusion. 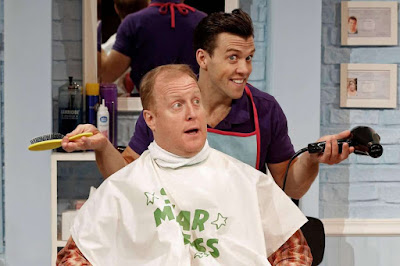 "Sheer Madness"  is being staged by Bob Lohrmann who has directed more than a dozen productions of the two-act comedy in the United Stage and Canada. Additionally, he has played all the male roles - at one time or another - in shows performed in Washington D.C., Philadelphia, Cleveland and Boston. Therefore, he knows the show inside out, upside down, frontwards and backwards, left, right and center.

From the start, there's no denying the outrageousness of this endeavor - big, broad, colorful, knee-jerk zany. So an awful lot depends on Lohrmann's technique, verve, snap and creative mindset. Not to mention his casting of the six major characters, his cheerful blueprint of the show and, more importantly, his comic invention and swift, bullish pacing.

Savvy director that he is, Lohrmann pulls out all the stops in grand, Mischief Theatre (they're the folks who created "The Play That Goes Wrong!") fashion. That said, this edition of "Sheer Madness" is staged with rigorous precision, style and stamina along with well-orchestrated humor, movement and impromptu deliberation. It sings. It soars. It flounces. It skips. It cajoles. It erupts with sparks of real madness (no pun, intended) and insanity as well as crafty bits and bobs you never once saw coming.

What's especially fun about "Sheer Madness" is the way it all comes together. Working from Portner's engaging comic scenario, Lohrmann finds great humor in the querulous eccentrics of the piece, its characters, their interactions and exchanges,  the giddy mechanics of the farce at bay, the actual whodunit, the interaction of the four suspects and the challenges set forth during the Q and A with the audience and the search for actual clues and truths (some of the banter is designed to throw you completely off track so it's important to pay attention because some of the characters are manipulative schemers), which changes from performance to performance.
All of this requires the actors to think quick on their feet, mixed rehearsed dialogue with improvisation seamlessly ( at the performance I attended, a surprise kiss was planted on the mouth of Nick by Tony during questioning turning the cop character beet red so much so, it left the audience in complete hysterics and nearly stopped the show) and finally, partake in play's conclusion (as previously mentioned, the audience votes by show of hands and picks the murderer) reenacting the scene of the crime at breakneck speed with the guilty party finally confessing to the crime. 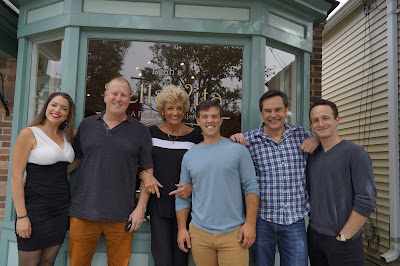 Ahnquist, a bright-eyed, intelligent actor oozing with plenty of charm and personality, jumps headfirst into his stereotypical gay hair salon owner characterization of Whitcomb with dash, merriment, purprose and drive. It's a showstopping performance where timing is everything, from start to finish. The actor makes physical comedy look easy without going overboard to get a laugh. Rehearsed or improvised, Ahnquist gets it right every time while adhering (or not adhering) to Porter's comic blueprint. If anyone is casting upcoming lead roles in the Broadway or National Touring edition of "The Book of Mormon," Ahnquist is your man. He'd be perfect.

As Nick O'Brien, Noonan knows how to play comedy and improvisation to the fullest without ever once losing the focus of his investigative character, his role in the story and his improvisational rapor and interaction with the audience. He does it effortlessly, bouncing back and forth with a creative comedic mindset and intuitiveness that gives "Sheer Madness" additional fuel and stamina and keeps the two-act comedy on track no matter what is thrown at him or other members of the cast.

Mootos brings a smarmy, slippery verve to Eddie Lawrence while Fitzgerald's Barbara Demarco is fresh, flirty, silly and always at the top of her game. As Thomas, Harvey has great comic timing which he uses to full effect when the script calls for it.
In the role of the classy and wealthy Mrs. Shubert, McMillan camps it up on cue with a dash of "Steel Magnolias" thrown in for extra measure, prompting non-stop laughs whenever her character is in the spotlight. Like those around her, she adapts to the play's conceit brilliantly and makes playing slapstick second nature. 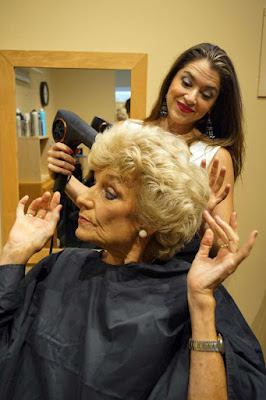 There's no denying the non-stop hilarity of  "Sheer Madness," a crazy physical comedy played with lunatic abandon by an energetic cast of six, all of whom are akin to Paul Portner's over-the-top play text. Bob Lohrmann's flip, breakneck staging is orchestrated with giggly, farcical aplomb. The improvisational interaction between the audience and the actors is embellished with "spot on" intuition, even though it changes from night to night. And in true interactive whodunit fashion, the audience decides who the murderer is and the cast plays out "that ending" in wild, unpredictable ways designed to leave you breathless and begging and begging for more.