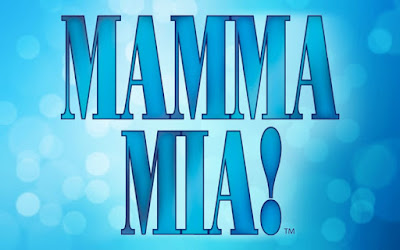 
"Mamma Mia!"
Here we go again.
You got that right.

At a time when everyone on the planet seems to be doing "Mamma Mia!" in one form or another, Downtown Cabaret jumps right onto the band wagon with its own interpretation of the popular ABBA musical and finds the right cast, the right production team and the right design team to move it right to the top of the leaderboard.

This is one of those shows that audiences can't seem to get enough of. And rightly so.
It comes gift wrapped with a catchy score, a happy ending, lively choreography and a cast of colorful characters guaranteed to bring a smile to your face.


It also serves up ABBA classics - each and every one a hit.
It displays invites of hugs, kisses, singalongs and clapping hands.
It is terrific fun for audiences of any age and gender.
It is cute, cheery, energetic and full-out.
It is shrewd, snappy and giggly.
It is a welcome diversion.
Its party atmosphere rings loud and proud.
Longevity has also been its reward. 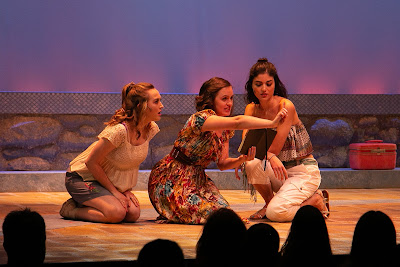 "Mamma Mia!" is being staged at Downtown Cabaret by Frank Root whose directorial credits include "A Funny Thing Happened On the Way to the Forum," "She Loves Me," "Into the Woods," "42nd Street" and "The Wiz." A smart and savvy director and storyteller, he brings tremendous wit, understanding, knowledge and pizazz to this production along with a smart sense of stagecraft which kicks it into orbit immediately and keeps it spinning and twirling most engagingly.

What's particularly refreshing about this incarnation of the oft-produced musical is that Root's playful and sunny take on it never falters for a moment. It is bright. It is fun. It is emotional. It is cute. It is sentimental. It is sexy. It is warm. It is fiery. It is cheery.
Nothing is taken for granted. Nothing is out of place. Nothing is over the top or thrown in for laughter's sake. Everything that happens - story arcs, music, character moves, changes in tempo and plot evolvement  - is perfectly mapped out, produced and staged fluidly and naturally.
Yes, we've seen the story before. Yes, we know how it all ends. Yes, we know the songs and the lyrics. Yes, we know who sings what and when.  But in the long run, it doesn't really matter. Root's imprint on this on this tender-hearted portrait of romantic life in the Mediterranean not only gives it the attentiveness and magical allure it demands, but his choices and what he does with them are so original, it's almost as if you're seeing "Mamma Mia!" for the very first time. 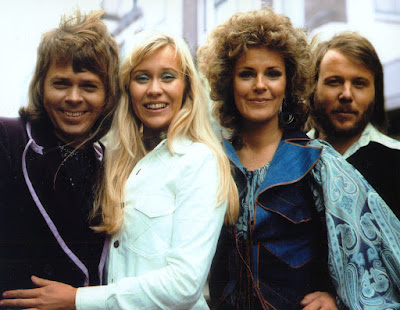 Based on the songs of ABBA, originally composed by Benny Andersson and Bjorn Ulvaeus (Stig Andersson is also credited in the footnotes for certain songs used in the two-act musical), "Mamma Mia!" includes 26 musical numbers culled from the pop-tinged ABBA songbook. They are "Prologue/I Have a Dream," "Honey, Honey," "Money, Money, Money," "Thank You For the Music," "Mamma Mia!" "Chiquitita," "Dancing Queen," "Lay All Your Love On Me," "Super Trouper," "Gimme, Gimme, Gimme (A Man After Midnight)," "Voulez Vous," "Under Attack," "One of Us," "S.O.S.," "Does Your Mother Know?" "Knowing Me, Knowing You," "Our Last Summer," "Slipping Through My Fingers," "The Winner Takes It All," "Take a Chance On Me," "I Do, I Do, I Do," "I Have a Dream," "Mamma Mia! (Encore)," "Dancing Queen (Encore)" and "Waterloo."
The songs themselves, nicely incorporated into Catherine Johnson's zippy, romantic story, are serviceable to the plot, it's evolved progression and the various characters who sing them. Every single one of them are fun, gum-drop gooey and completely hummable. So much so, audience members cast resist the urge to sing quietly at their tables along with many of them or raise their hands in the air swaying back and forth to the beat of the music as if they were at some ABBA concert from yesteryear.

With Sabrina Post, behind the scene's, serving as musical director, this production of "Mamma Mia!" enthralls from start to finish. Musically, it snaps, it sparkles and it shines. It has plenty of heart and soul. It has plenty of drama, sweetness and emotion. It also comes packaged with a glitter ball lightness and fantasia that's completely irresistible.
Completely akin to the song style that is ABBA - pop rock, light ballads, folksy glam, novelty kitsch, sweet and sentimental - Post dutifully respects and understands the unstoppable, invincibly commercial romantic bliss that is ABBA, the group's lathered expressionism and the surface beauty and intimacy of the songs themselves. And what she does with the ensemble is absolutely amazing. The harmonizing, the blending of voices and the pitch-perfect choral sound necessary for some of the musical's big ensemble numbers is praise-worthy with a capital P. 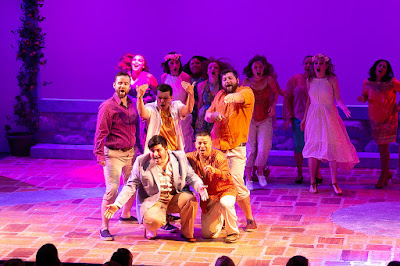 Choreography, when done right, is also key to the "Mamma Mia!" experience.  For this production, Downtown Cabaret has enlisted the talents of Jennifer Kaye, a magnificent auteur and dance wizard who is wholeheartedly connected to the exquisite emotion, the wryness, the focus and the intensity of the core love story at hand. Here, she takes hold of the show's many different musical numbers - each a stand alone piece of ingenuity, depth and verve - and creates a whirlwind of ABBA frenzy that reflects the conceit of the show's originators and collaborators.

Crafty, dazzling, celebratory, sexy and ferocious, Kaye dazzles her audience with mass dance maneuvers and rhythmic patterns that not only enhance and drive the musical story forward, but heighten the dramatic and passionate momentum of the piece, its flourish and its eventual happy ending. Everything that happens on the Downtown Cabaret stage is well-rehearsed and trademark athletic. Through it all, the entire "Mamma Mia!" cast are in fine form, reveling in the eye-popping,
wildly uninhibited, Broadway-style choreography that Kaye tosses their way most advantageously.

This is dance full of brains, craft, propulsion and atmosphere. It absorbs you into its world and subject matter with increasing power and beauty. It finds the right mindset of the moment and runs with it. It is dynamic and thrilling. It also strikes the right storytelling beat with absorbing harmony. The churning bodies of  Kaye's handpicked, incredible dancers are completely swept up in the on-stage dance mania of it all, propelled by a calibrated energy and urgency of rapid moves, gestures, turns and expressions precisely mapped to the exact rhythm of the music and the lyrics. Amazing with a capital A. 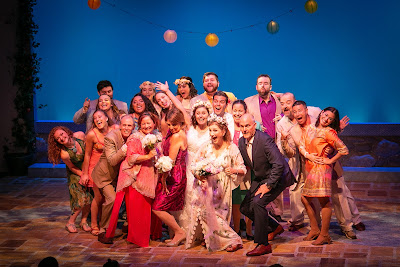 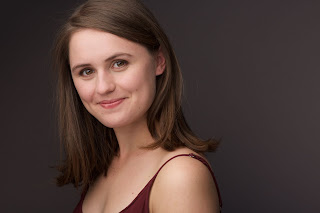 As Donna Sheridan, the mother of Sophie and the former lead singer of the girl group "Donna and the Dynamos," Priscilla Squiers' rich, confident voice turns her renditions of both "Mamma Mia!" and "The Winner Takes It All" into two showshopping turns like no other.  The beguiling Julia Lennon, in the role of Donna's daughter, Sophie, has the voice and radiance of an angel and star power of someone who is very comfortable in the spotlight. Angela Jackson brings the right snap, personality and comic verve to the part of Rosie. Susan Kulp hilariously portrays the vain, showy and sex-crazed antics of Tanya. Mara Santilli (Ali) and Casey Walsh (Lisa) are harmoniously in sync as Sophie's best friends. Bill Molnar is a very caring and charismatic Sam Carmichael.  As Bill Austin, Chris Hetherington is trademark comicical in all the right places. Robert Halliwell makes all the right moves as Sophie's eager, loving young fiancee. John Royse's Harry Bright tackles his Englishman role with cheeky, UK full-on wit and emotion.

The perfect musical to jump start the 2019-2020 season at Downtown Cabaret, "Mamma Mia!" is a high-spiripted, uplifting musical entertainment that pulls out all the ABBA classics with obvious affection, sugar-coated sparkle and forgivable heartbreak and has great fun doing so. It's typical Broadway musical fare - sparkly, flavorful, energetic- that puts ABBA back on the brain again, performed with thrilling exhilaration by the 21-member cast.
Frank Root's direction is astute, snappy, stylish and up-tempo. Jennifer Kaye's choreography is fast, frenzied and fiery. The set, designed by David McQuillen Robertson, is functional, gorgeous and atmospheric. Lesley Neilson-Bowman's costumes are both sunny and colorful. And finally, Axel Hammerman's multi-textured lighting palate agreeably complements the musical's airy, emotional and sugar-coated delirium. 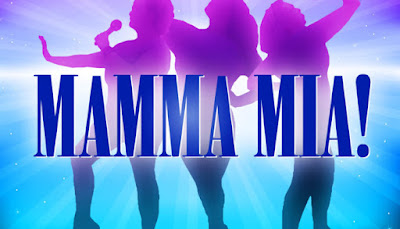