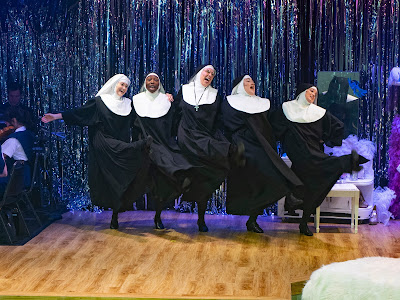 The joyous high that stems from any production of Dan Goggin's "Nunsense" comes from the cheery mindset of all parties involved - the cast, the director, the choreographer, the musicians, the production crew, the people who greet you at the door.

That harmonious theory is embodied with fearless repartee in Playhouse on Park's glorious production of Goggin's 1985 mega-hit - a delightful piece of fluff and candy floss that excites and cajoles with the vaudevillian splendor and dark comedy angst envisioned by the "Nunsense" guru himself, mixed with playful dashes of whimsy, spirit, fire, energy and snap. And finally, a candy-coated flourish that makes this revival, completely irresistible.

This is "Nunsense" like you've never seen it before.

It is a dozen times better than the original 1985 off-Broadway production that debuted at the Cherry Lane Theatre with Marilyn Farina, Christine Anderson and Vicki Belmonte, among others, in principal roles. It is way funnier than the zany London version that played the Fortune Theatre in 1987 with former "Goldfinger" star Honor Blackman as Mother Superior. It also surpasses many of the subsequent, well-intentioned revivals that have played both Equity and Non-Equity houses in Connecticut.

And, that's just the beginning.

Playhouse on Park has done it again.
"Nunsense" raises the bar, perhaps even the roof, in this extraordinary, laugh-a-minute revival. 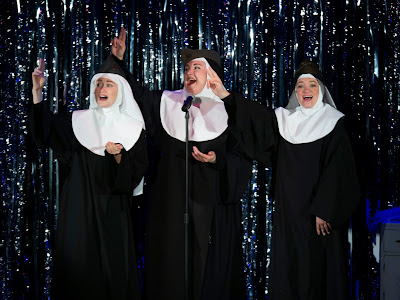 The plot, as envisioned by Goggin, is a complicated one steeped in madness, hilarity and non-stop laughter. For story purposes, the Little Sisters of Hoboken have suffered a great loss after their cook, Sister Julia, Child of God, unintentionally poisons and kills off 52 of their fellow nuns with a specially prepared vichyssoise recipe that has left them falling over dead in their chilled soup.
Burials, of course, quickly ensued, but lack of funds for four remaining sisters (the Rev. Mother has selfishly just bought a every expensive television) left them frozen in the convent freezer.
Not to worry though. To give them a proper send off, the Little Sisters have decided to stage a musical comedy variety show and send the thawed-out remains of the dearly departed merrily on their way to that beloved resting place in the sky.

Staging "Nunsense" is the tremendously talented Darlene Zoller (co-artistic director of Playhouse on Park) whose directorial credits include "I'd Rather Be Dancing," "Chicago," "Swinging on a Star," "That Holiday Feeling" and the theater's very own racy "Mama D" series. Looking at this show through very fresh eyes, mixed with cleverly orchestrated dollops of imagination, wit and chutzpah, she leads Playhouse on Park to victory with the best crafted "Nunsense" musical the state has seen in the last decade or two. As with previous productions, she takes the show's blueprint, looks at it front, back and center, shakes things up creatively, decides what works and what doesn't, adds her own personal stamp and voila, it's magic of the very best and personal kind.

Laughs come in all the right places, the show's giddyap conceit is realized to the fullest and the musical flows from scene to secne and song to song with a freshly-minted gallop that is absolutely irrestible. Doubling as the show's choreographer, Zoller is at the height of her game investing knowledge, understanding and razzle-dazzle through the lens of dance. Her choices, her combinations, her movements, her beats and her rhythms heighten the show's dance allure, both comedically and dramatically. She also adds a lot more dance to the scenario than previous incarnations of "Nunsense" where cuts were made based on the mindset of the choreographer or the dance experience of the cast. Here, Zoller pulls out all the stops using showstopping choreography of the highest order, intensified by bold strokes, bright sunshine, sharp shifts and snaps and electrifying master class quickness. Amazing! Oh, yes. 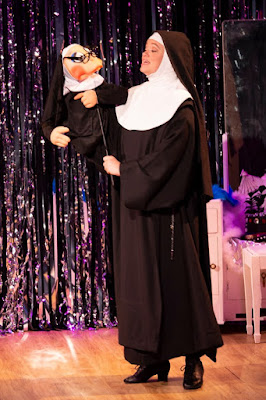 To bring the musical side of "Nunsense" to life, Goggin has crafted 22 heavenly, but very vital to the story, songs. They include "Nunsense Is Habit-Forming," "The Biggest Ain't the Best," "Playing Second Fiddle," "So You Want To Be a Nun," "Turn Up the Spotlight," "Tackle That Temptation," "Lilacs," "Just a Coupl'a Sisters," "I Just Want to Be a Star," "I Could Have Gone to Nashville" and "Holier Than Thou." The songs themselves are witty, campy, sweet and ever-so-tuneful. The melodies and orchestrations are perfectly in sync with the "Nunsense" concept. They drive the story forward. They ideally suit the talents of the five different characters who sing them. They also come peppered with the zing and snap that Goggin is famous for, laced with moments that touch the heart, produce umpteenth belly laughs and bring a smile to your face.

For this production, the onstage band is led by the versatile Melanie Guerin (musical director/keyboard) with the orchestral assistance of Elliot Wallace (drums), Mallory Kokus (reeds) and Phoebe Suzuki (violin). With Guerin calling the shots, the musical score for "Nunsense" is splendidly recreated with the high-spirited, full of fire wisdom set forth by Goggin. As the two-act musical unfolds, there is everything to enjoy about Guerin's melodic take of the material, all of which is played with the skill and proficiency that always categorizes her work at Playhouse on Park. Orchestral textures are beautifully clear. Individual songs and production numbers are well paced, emotionally driven and unleashed with flourish and flair. Harmonies, solos, duets and ensemble numbers also benefit from Guerin's tutelage. If anything, the "Nunsense" score has never sounded better. Musically, it also surpasses the tantalizing appeal of the original off-Broadway and London production, and subsequent revivals of the work that have played other Connecticut venues, in recent years, both Equity and non-Equity. 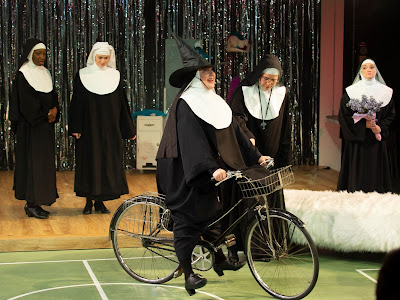 "Nunsense" stars Amanda Forker as Sister Mary Regina, the Reverend Mother, Hillary Ekwall as Sister Mary Amnesia, Lily Dickinson as Sister Robert Anne, Brandi Porter as Sister Mary Hubert, the Mistress of the Novices and Rachel Oremland as Sister Mary Leo. All five actresses are perfectly cast for their respective roles, each projecting the right attitude, mentality, humor, craziness and imprompu silliness associated with each of the heavenly parts they are asked to portray. As directed by Zoller, they also bring much more to the actual production than what's written on paper. Vocally, everyone is outstanding - this is the best "Nunsense" cast ever - mastering the melodic flair and merriment of Goggin's popular score to the fullest (showstoppers include "Nunsense Is Habit-Forming," "I Could Have Gone to Nashville," "Turn Up the Spotlight," "Holier Than Thou," "So You Want to Be a Nun," "I Just Want to Be a Star") and demonstrating an impressive wit, intelligence and ownership for the show's different musical styles, mood swings and vaudevillian influences.

Season after season, Playhouse on Park offers its audience choice, diverse plays and musicals - "The Scottsboro Boys," "The Diary of Anne Frank," "The Revolutionists," "Avenue Q," "In the Heights," to name a few - that reflect and cement the theater's ongoing commitment to the arts. Kicking off Season 11 with Dan Goggin's ever-popular "Nunsense," the West Hartford venue serves up some light-hearted musical fare that is jolly good fun and flat-out hilarious in all the right ways. Director/choreographer Darlene Zoller's staging is refreshingly realized. The cast populates the song-and-dance story with detail, comfort and humor.
One of the year's best musical entertainment's -  and one that shows no sign of ever slowing down - this "Nunsense"  is a thrilling rediscovery of a very familiar and lovable story. Judging from the cheers, laughter and standing ovations that greet every performance, the audience thinks so too. 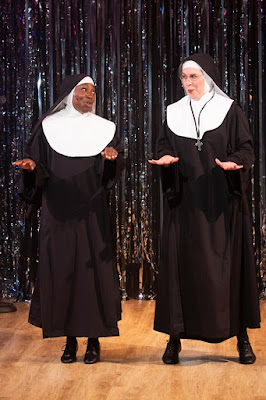 Posted by JimRuocco at 3:32 PM