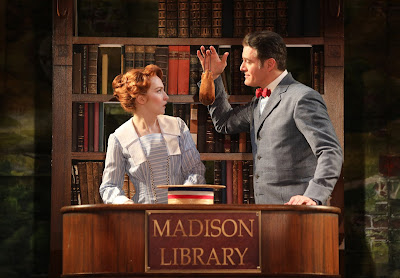 No amount of good cheer has been left unturned by director Jenn Thompson in Goodspeed Musicals' thrilling, affectionate revival of Meredith Wilson's 1957 Broadway classic  "The Music Man." It is yet another one of those musical productions that has gone full tilt with its ambitious, storytelling strategies, drenched in soft, rainbow colors that dazzle, sparkle and explode like a vintage fireworks display on the Fourth of July. Thompson wouldn't have it any other way.

It has the fizz and taste of homemade lemonade on a hot summer afternoon. It has the snap and giddy up of a 1912 vintage musical scrapbook magically brought to life. It also has the good sense to remain faithful to its original source, its ice cream parlor values and traditions and its past remembered innocence, hospitality, kinship and Iowa stubborn abandon.

With music, lyrics and book by Meredith Wilson, "The Music Man" revisits River City, Iowa and retells the oft-told story of Harold Hill, a fast-talking traveling salesman, womanizer and con artist who sells band instruments and uniforms to young boys and teenagers with the promise of big band glory days and pageantry.

One small problem: He can't read a note of music, much less conduct a full band concert before a very excited, live audience. 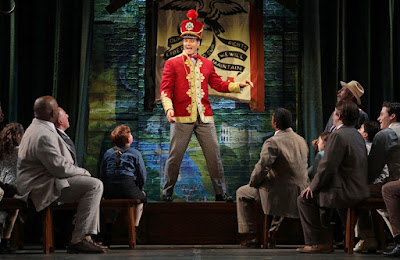 What he can do, however, is turn an entire town upside down, charm his way into everyone's lives, then, finally skip town with their hard-earned money faster than you can say John Philip Sousa.

Jenn Thompson who staged both "Oklahoma!" and "Bye, Bye Birdie" for Goodspeed Musicals and most recently, "A Doll's House, Part 2" for TheaterWorks/Hartford, is the perfect fit for "The Music Man."  A creative talent who is always looking for new ways to reinvent the standard book Broadway musical of yesteryear, Thompson adds her own layer of nostalgia and whimsy to the production, but finds new ways, new emotions and new textures to heighten her retelling of an already great show.
Here, she brings a great sense of pride, passion, equality and commitment to the musical, thus, making it much more profound, curious, timely and ground-breaking. It's the same story, yes, but through her eyes, you see it much more differently, which is meant entirely as a compliment.

Staging the two-act musical, Thompson knows exactly what she wants, when to take a breath, when to take a pause, when to let things pop and when to get the adrenaline flowing. Here, as in "Oklahoma!" set changes, musical numbers, conversations, dances and sound and light cues are expertly timed and reenacted without the slightest hesitation. Having the actors enter and exit up and down the aisles of the actual theater (when necessary, that is) gives the production a three-dimensional thrust, feel and intimacy that works to full advantage. Elsewhere, she gives this production a steady heartbeat and pulse that heightens the show's enjoyment, its musicality, its early 20th century flourishes and its gosh-oh-gee playfulness and sentiment. 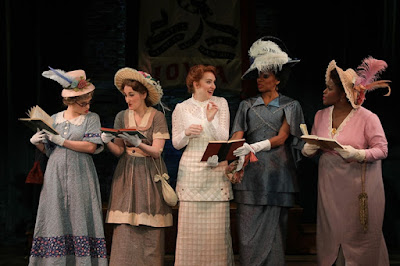 "The Music Man" features  24 musical numbers. They are "Rock Island," "Iowa Stubborn," "Ya Got Trouble," "If You Don't Mind My Saying So," "Goodnight, My Someone," "Columbia, Gem of the Ocean," "Ya  Got Trouble (Reprise)," "Seventy-Six Trombones," "Sincere," "The Sadder But Wiser Girl," "Pick-a-Little, Talk-a-Little/Goodnight Ladies," "Marian the Librarian," "My White Knight," "The Wells Fargo Wagon," "It's You," "Shipoopi," "Pick-a-Little, Talk a-Little (reprise), Lida Rose/Will I Ever Tell You?" "Gary, Indiana," "Lida Rose (reprise)," "Till There Was You," "Goodnight, My Someone & Seventy-Six Trombones (reprise)," "Till There Was You" (reprise) and "Finale."

As devised by Wilson, the score itself is rich, ripe, round and booming. It unfolds with the breezy, broad and playful tap and lyricism that befits the story, its evolution and the characters who sing them. It is also uniquely its own - magical, moving, bashful and powerful. And even after countless hearings - it was written 62 years ago - it still packs a splash, bang, wallop that's impossible to resist. 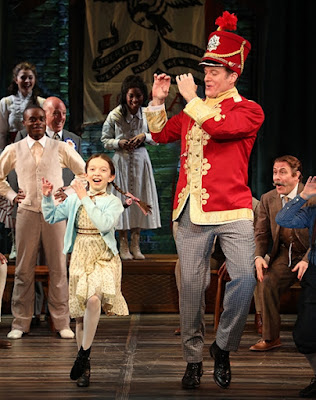 Serving as musical director for "The Music Man" Michael O' Flaherty puts his own personal stamp on the popular score and hones a meticulously crafted work that's sweet and sentimental, focused and  driven, melodic and tuneful. No camp. No goo. No candy floss. No sugar. Under his tutelage, every one of the songs is completely realized and envisioned to let you see and hear it all the more clearly. 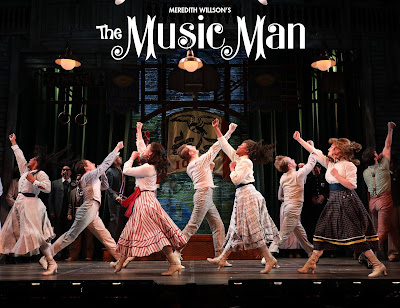 Patricia Wilcox's dance movement and choreography for "The Music Man" is sweet, atmospheric, nostalgic and flavorful. It has a wonderful fluidity about it, which serves the material well. It is perfectly in sync with the era itself and radiates a vintage storybook charm reflective of both the 1962 film that starred Robert Preston and Shirley Jones and the 2000 Broadway revival with Craig Bierko and Rebecca Luker. It is both unique and inventive. It is all in good fun. It is also decidedly different, most noticeably in the opening parts of "Iowa Stubborn," which recalls "Ascot Gavotte" from "My Fair Lady" and various portions of the re-imagined "Marian the Librarian" and "Shipoopi." Regardless, it works splendidly and adds additional shading and nuance to these already popular musical numbers.

Casting "The Music Man," Thompson is in her element. As with "Oklahoma!" and "Bye, Bye Birdie," she has cast the production particularly well using actors and actresses who are plum perfect for the individual roles they are asked to portray. This, in turn, gives the musical a much more honed, realistic aura that works, excites and draws us deep into the Iowa-honed mentality of the River City town folk, their story, their music, their singing, their dancing and their dialogue. 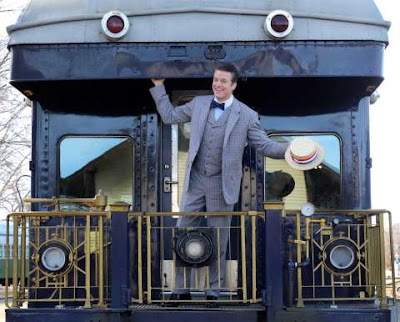 As Harold Hill, the very polished and charismatic Edward Watts, an actor who bears a striking resemblance to a very youngish Roger Moore takes us down a very different path than the one created by Robert Preston in the original 1957 Broadway production and the subsequent 1962 film adaptation. Granted, he's not as slippery, calculating or as brazen as Preston's Hill was, but he still captures the magnetism and pulse of the character, his overt womanizing, his calculated risk-taking and his refusal to see the error of his ways until he finally meets and falls in love with a woman who makes him see the wrongness of his fake identity, fake charm and fake boy's band.
At Goodspeed, he takes charge of the role in smart, savvy actor/audience fashion from the moment he is introduced to everyone in the showstopping, invigoratingly staged "Rock Island" at the start of the show. He sings beautifully. He dances beautifully. He turns women's heads with a magical mischievous grin that melts them to butter. He also gives Hill a strong sense of style and purpose that befits the story and his role in it. 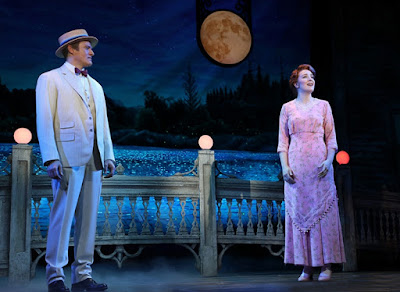 Ellie Fishman, in the role of Marian Paroo, the town librarian and music teacher who suspects Hill of being a genuine, complete fraud, brings a strongness and take-charge mindset to the role, which heightens her presence in the story and makes her eventual romance with the fast-talking music man much more interesting, palpable and believable. Her rich, lilting soprano voice not only heightens the melodic allure of "Goodnight, My Someone"  and "My White Knight," but as a singer, she finds the intended meaning behind every lyric and lets it carry her away most engagingly.

Light, fluffy and heartfelt, "The Music Man" is an uplifting musical entertainment of incredible energy, frivolity and living, breathing nostalgia. The songs are lively, spirited and character-driven. The dancing is spectacular. The performances are fresh and full-bodied. The direction is rich, flavorful and fancy free. And the show itself creates a tapestry of good cheer and merriment so memorable, when you leave the theater, it's almost as if you're walking on air. 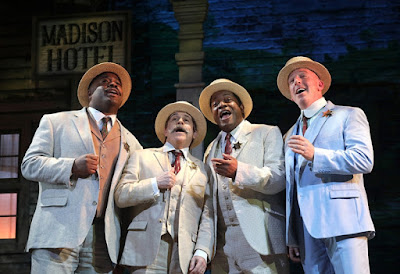 Photos of "The Music Man" courtesy of Diane Sobolewski.

Posted by JimRuocco at 1:31 PM